Some colleagues and community friends of the late Dr. Iva Gwendolyn Jones, Professor Emerita of the Morgan State University Department of English, honored her as a scholar, leader and teacher, by extending as a gift to Morgan State University the Dr. Iva G. Jones Medallion Emblem, which is the conception of the late Assistant Professor Emeritus Samuel L. Green, who was one of the two co-designers of the symbol. The second co-designer, and medallion silversmith, was retired Associate Professor Kenneth Royster.

The Emblem fabric approximates in width the border of the master’s hood, is velvet, and employs the University colors — blue and orange. The detachable chain, which surmounts the emblem and helps to drape the wearer’s front and shoulders, bears silver mounts that hold the medallions in suspension.

Annually, colleagues, employing University-approved criteria, select an individual to wear the Emblem. Those honored by this selection are persons who reflect vividly in their professional lives the qualities distinguishing the individual whose name the Emblem bears. 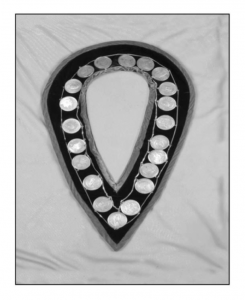